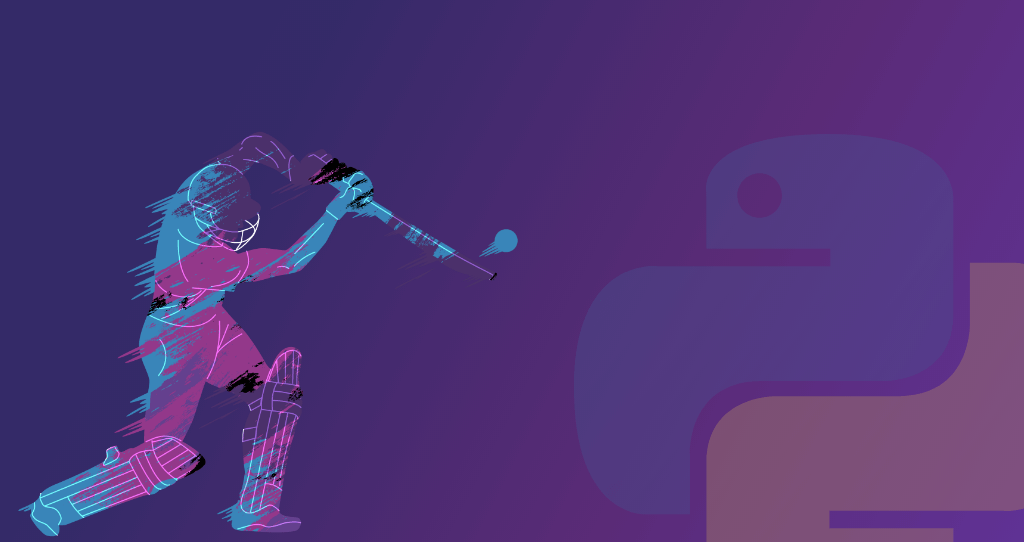 The Indian Premier League (IPL) is the biggest domestic cricket league on the globe and with the thirteenth edition underway, it is a perfect time to enjoy the game and explore some machine learning techniques along with it.

This year the IPL title sponsors are Dream11. Dream11 is a fantasy sports platform based out of India. It allows users to play fantasy cricket, hockey, football, kabaddi and basketball. 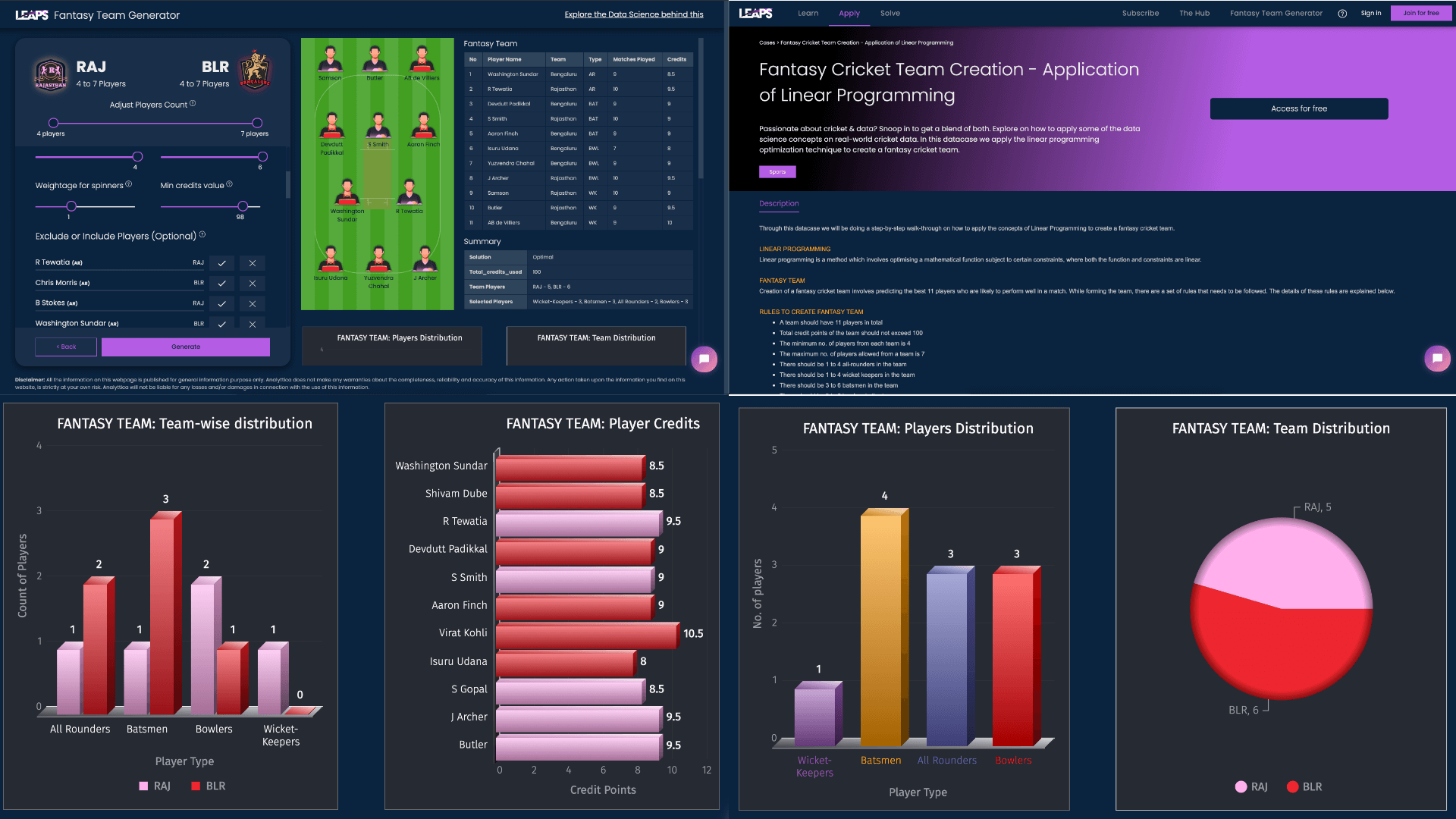 In this article we will be applying Prescriptive Analytics on sports where we will focus on selecting a fantasy cricket team with one of the matches as an example.

It will be a step-by-step code walk-through using Python. Along with it, we will also be using the open-platform Analyttica TreasureHunt® LEAPS to achieve the same without having to code.

Fantasy Cricket in a Nutshell

Rules to create a fantasy team

There are a set of rules that needs to be followed to build a team.

Following are the rules to form a fantasy cricket team

How to pick the players

Additionally, for every match, following information is available for each of the players:

Any of the above metrics can be used to pick the best team.

Linear Programming in Operations Research is one of the scientific techniques that is used to get an optimum solution to the given business problem by taking resource scarcity and constraints into account.

Linear programming allows us to model real-life problems into mathematical models represented by linear relationships. It involves an objective function to define what we are trying to achieve and the creation of constraints as linear inequalities. As the name clearly specifies, the relationship between the objective function and constraints should be linear in nature (one-degree equations).

Linear programming can be used to solve many real-life problems and fantasy cricket is one of them.

In order to create a fantasy team one needs to select the best players based on a objective. The final team formed should follow all the rules or constraints put by the platform.

This makes it a perfect problem that can be solved with Linear Programming. We need to maximize the team’s selection metric projection, while respecting the given budget (credits) and team composition constraints.

Approaches to build the solution

Here we will be using two approaches to build the solution, one for users who wish to code & solve and the other is dedicated to users who want to learn the concept and apply it using the tools.

We will go through both the approaches here:
Approach 1: Solving the Linear Problem using the Python package PuLP

Feel free to try out any of the approach that excites you.

Getting started with ATH LEAPS

Analyttica TreasureHunt® LEAPS is a patented open-platform to Learn, Apply & Solve all the machine learning and AI problems of a data analyst/scientist. It has over 650 inbuilt functions that can be leveraged through simple point & click. It also provides a coding console for those wanting to get their hands dirty.

You can refer to this datacase on LEAPS: https://leaps.analyttica.com/sample_cases/2273

In this case study we will go through both the approaches to solve the problem.

Choose the “Apply” section on the top left of the screen. Choose “My Cases” – “Create New Case”. Provide the case name, description, dataset and you are good to get started. 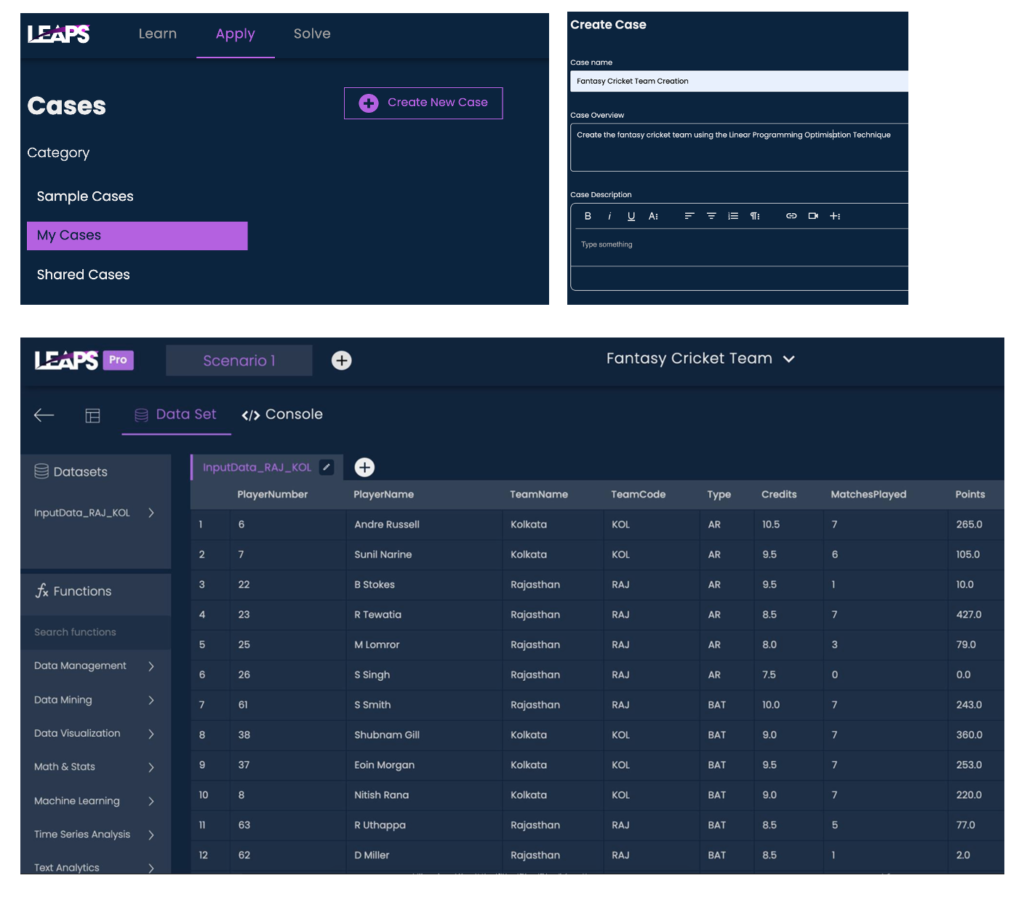 NOTE: Approach 1 can also be done on any Python IDE but might include the additional overhead of setting up the dependent packages like pulp & ipywidgets.

We will be using the python package PuLP to create the linear problem and solve it.

In addition to the provided rules, additional constraints can be added for the users to play around and create the best suited team.

Once an optimal solution is identified, it will generate the fantasy team along with some summary details. In addition, we will also be using the ipywidgets package to build an UI in Jupyter notebbok for users to input the additional constraints.

The code snippets below is a part of the complete code to help the readers understand & try out the flow.

Approach 1: Get started with ATH LEAPS

If you are trying this out on ATH LEAPS, then choose the console option on the top to start a jupyter kernel

In addition to the regular packages like numpy, pandas, sklearn, this code also requires the installation of pulp.

In case you are using pip, all the packages can be installed with the ‘pip install’ command.

NOTE: This step is not required if you are working on ATH LEAPS.

The program will require two kinds of input. One will be the player details and other will be the user configurations to building the linear problem.

The player details is provided in a csv file. Sample contents of the file will be like below.

Create the linear programming problem with a name

Prepare the variables required to create the objective function and the constraints. 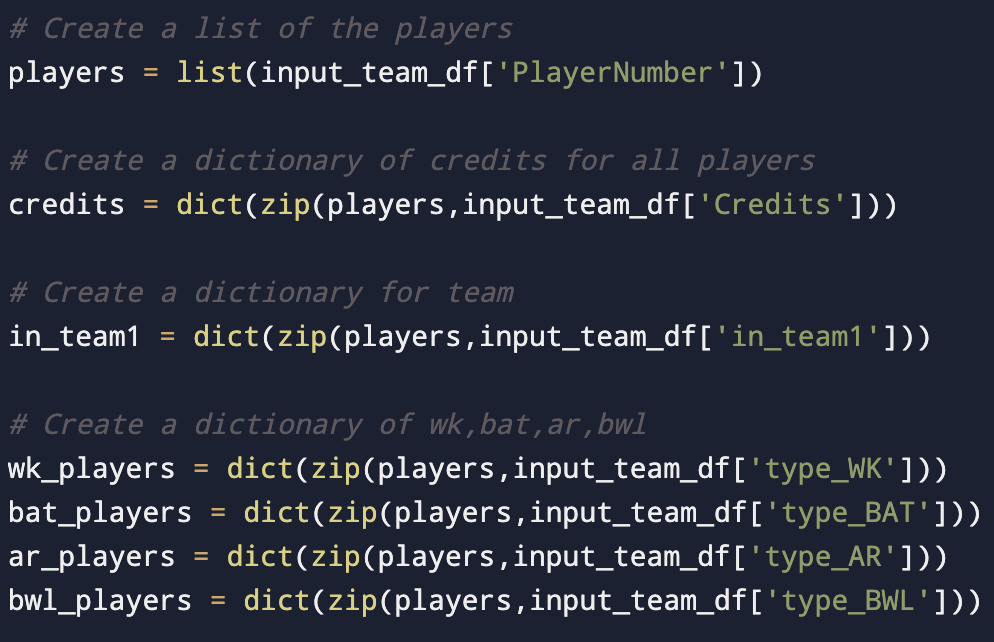 Similar variables should be created for each of the constraints. Shown above is a sample. Same approach can be used to create all the required variables.

Here the objective function could be defined based on one of the below:

This choice can be given to the user to configure based on which the objective function can be set.

Constraint based on number of players

There should be exactly 11 players in the final team. This can be set with the below constraint.

Constraint based on players from Team 1

Each team can have 4 to 7 players. This can be configured further by the user if required.

Constraint based on players in the line-up

Since the playing 11 will be known only during the toss (normally 30 minutes before the start of the match), a constraint can be added on the players to be picked.

Now that the constraints are added and the objective defined, we are ready to solve the problem.

Since the goal is to maximize the objective, set the objective details to the problem accordingly and allow pulp to solve it.

Linear program will try to solve the problem by identifying the best selection that will maximize the objective function and also fulfilling all the constraints that have been set.

In case it is not able to find any feasible solution with the given constraints, then it will return the status as infeasible. Pulp will drop the constraints that cannot be fulfilled and return an output. 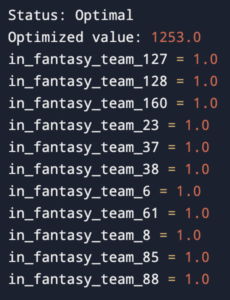 Approach 1: Playing around with the data

To make the application more interactive, ipywidgets have been used so that the configuration values can be selected by the user on a Jupyter notebook.

We will not go through the details of creating the widgets on Jupyter notebook as a good amount of documentation is already available for it and also it is not our area of focus here.

These configurations are internally converted to either the objective function or constraints. 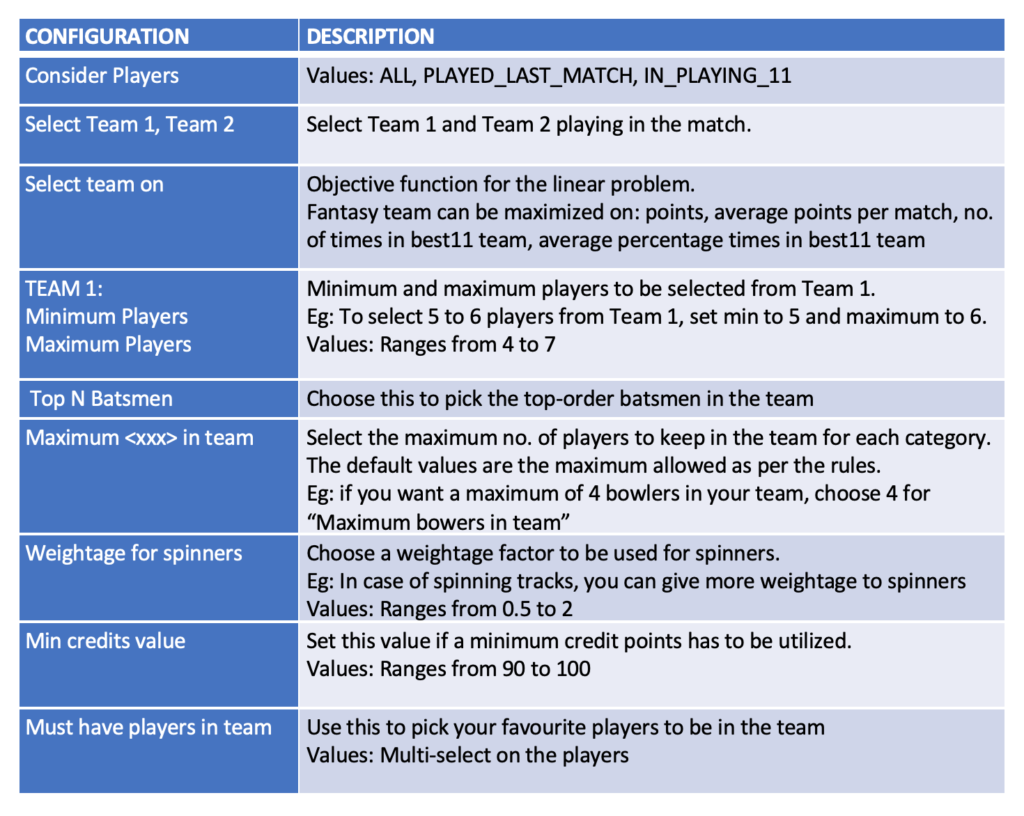 Give your choice of constraints and click on the “CREATE FANTASY TEAM” button. 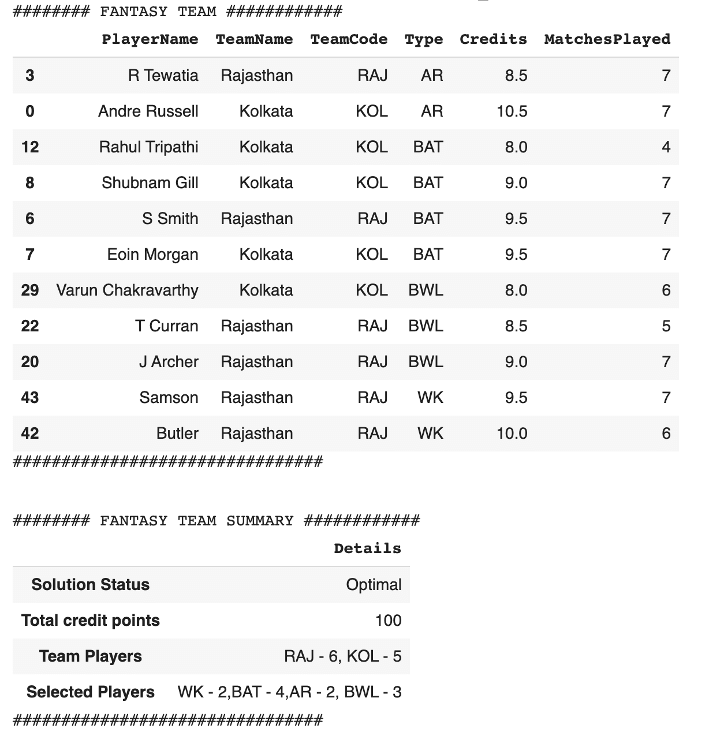 BANG!!! You are ready with your fantasy team to start participating in the contests!!

In this approach we will see how this problem can be solved without having to code. Here we will be using the point and click functions that are readily available on the platform.

To solve this problem, we first need to convert the data to the required format that can be fed into the Linear Program

Approach 2: Prepare the data to be fed into the Linear Program

Create dummy variables from the categorical variables so that constraints can be applied on them.

Note that the categorical variables are created twice as two constraints need to be applied on each of the categories for the lower limit and the upper limit. 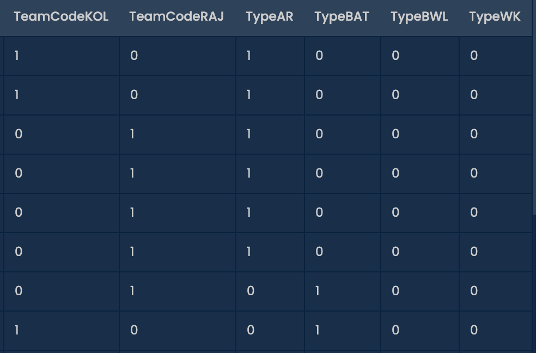 Rename columns to match the constraint name. This is an optional step. 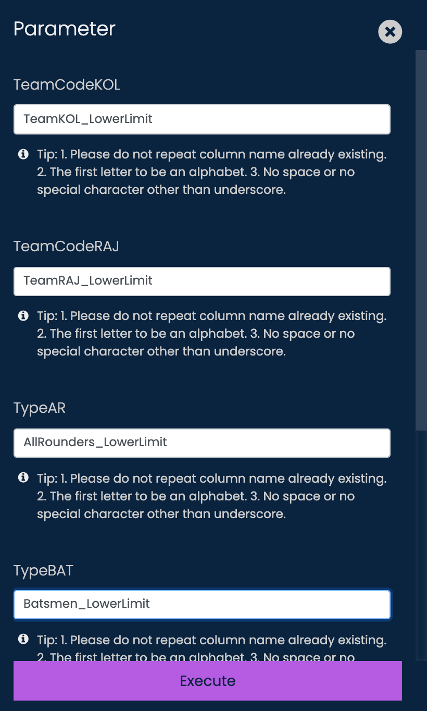 Transpose the columns so that each constraint variable is available as a row in the table. The player name will be column headers as the final result should be a binary flag on each player to indicate if they are in the team or not. 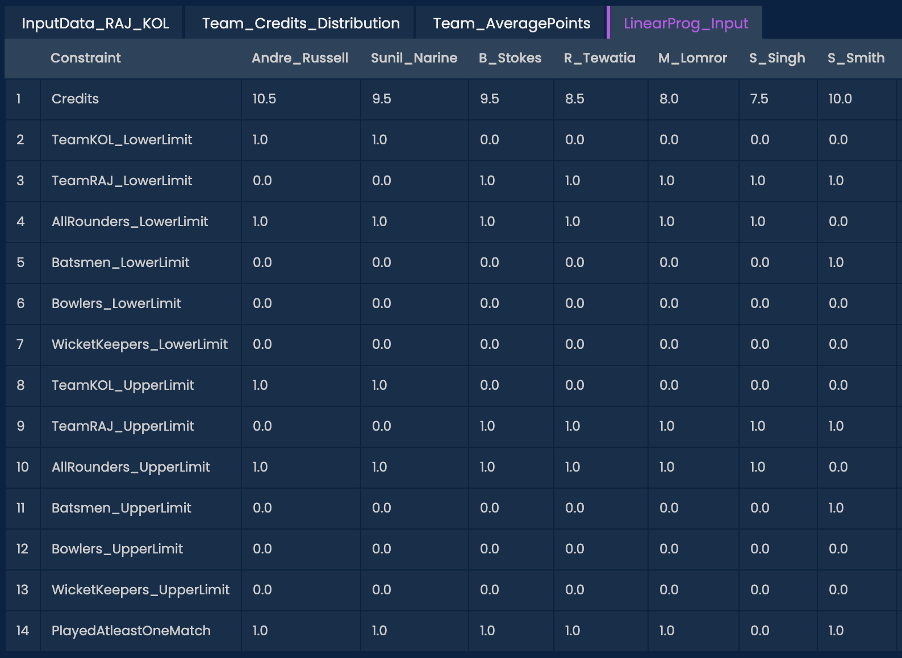 Run the alias function to create the columns for the constraint condition and the decision variable.

The constraint condition will be the inequality conditions like “<=”,”=”,”>=”

The decision variable will be the values that will decide the output. It is essentially the right-hand side of the inequality equation.

Eg: For setting a constraint on total credits to be within 100, following should be set: 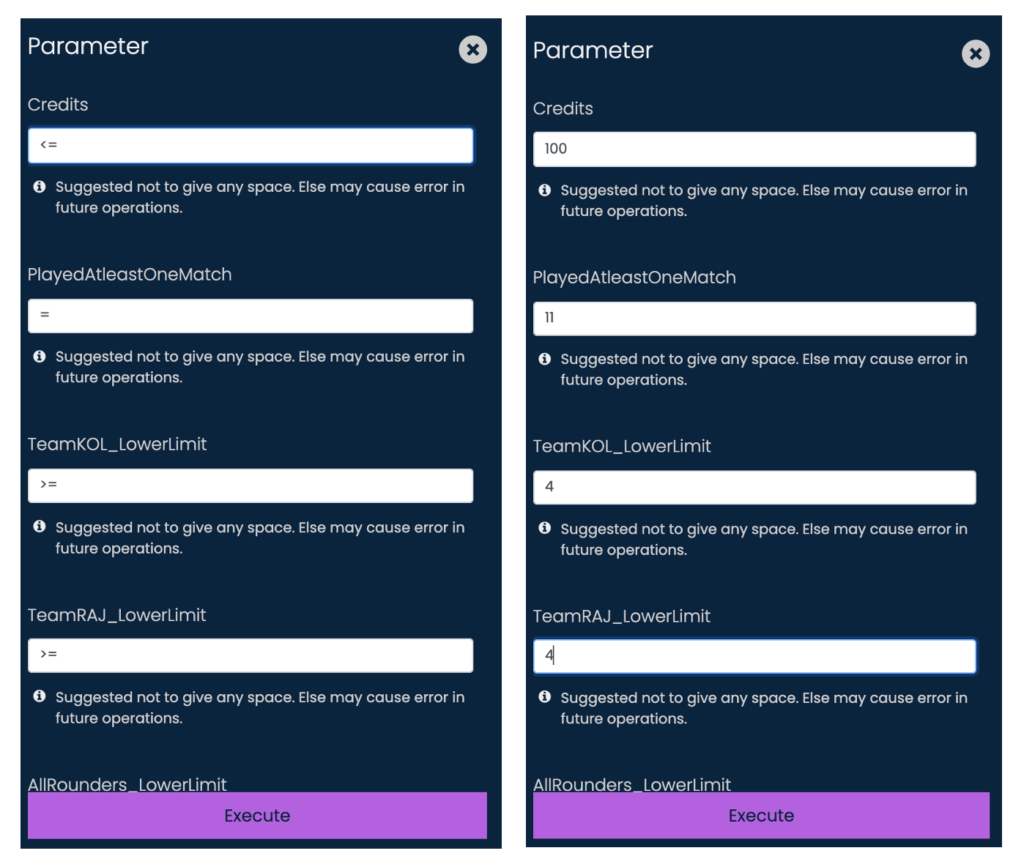 Change the name of the new columns created by alias to match the terminologies in Linear Programming.

This is an optional step and will not impact the output in any way. 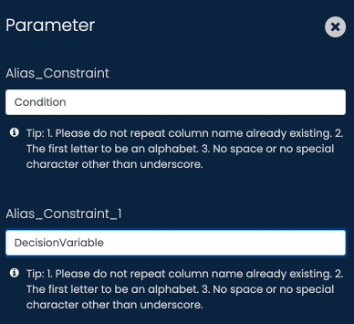 The above 5 steps will convert the input data to a format that can be directly fed into the linear programming function to give us the fantasy team. 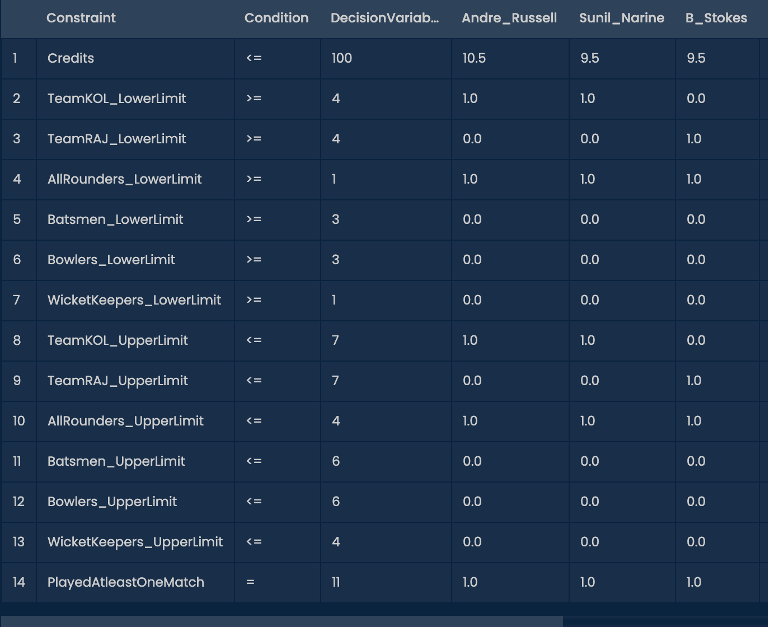 Run the Integer Programming function with the required parameters to get the solution.

Variable type has to be set to Binary in this case as we want to have a binary output on whether the player should be in the fantasy team or not.

If the solution cannot be found with the given constraints, then the function will return the result as infeasible solution. If a solution is found, then the result will be “optimal”.

In the solution identified below, the optimal flag will be set to 1 for the 11 players who should be included in the fantasy team. It has found the maximum player points as 1253 with the given constraints.  Here 14 constraints have been used. Similarly, more constraints can be added. 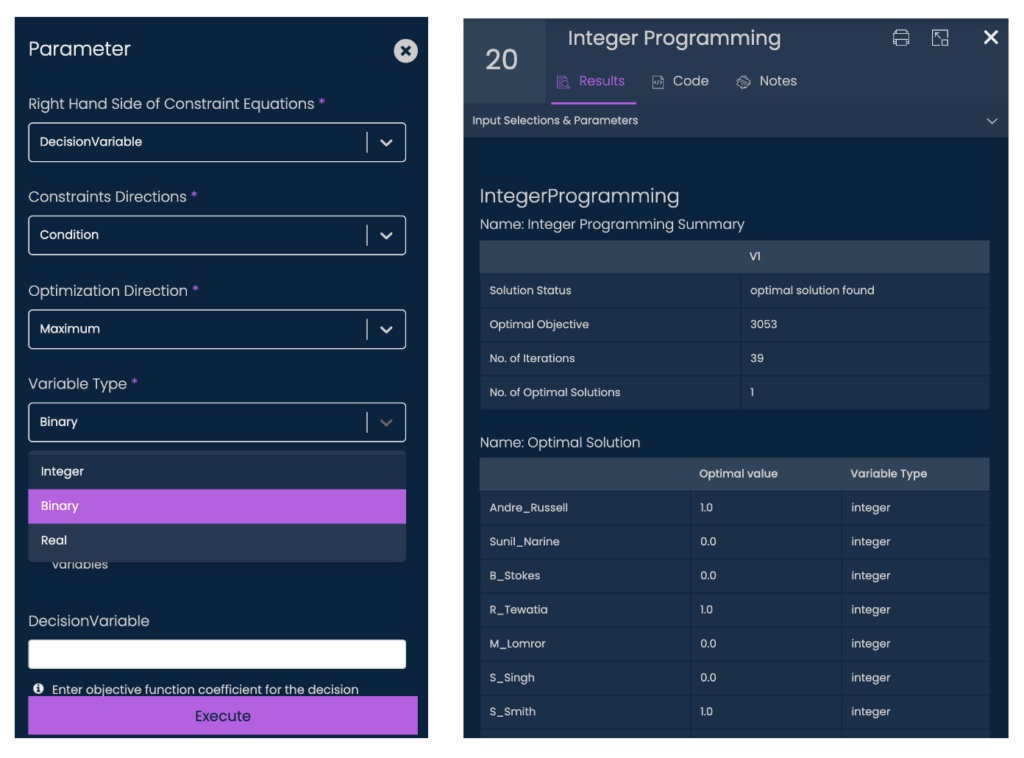 hat’s it!!! 6 simple steps to be followed and you are ready with the fantasy team without having to write a line of code.

This article is a simple example of how we can apply the linear optimization technique on cricket to pick the best players. The principles of linear optimization can be applied to many problems that have a fundamentally simple goal like scoring more fantasy points or being a popularly selected player.

Try it out and play with it. To explore more, we can get in some more historical data for each of the players and add that to the selection constraints. Though this may not make the elite team always, it will surely guide the user while picking the team.

Check out the sample cases section in LEAPS for this datacase with all the steps for further reference.

Disclaimer: the fantasy team is only suggestive based on the data provided and the constraints given. It is not guaranteed that these players will be in the best11 team at the end of the match. Please use your own judgment while picking the team 😉.

We are happy to help you. Leave us a note and we will get back to you.